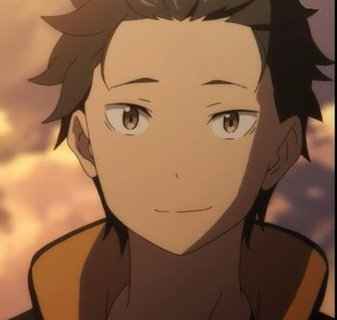 The men gazed at him with scorn and contempt as Subaru appraised them. They appeared to be in their mid-twenties. Their clothes were filthy and it was as though their inner evil had manifested on their faces. They weren’t subhuman, but they couldn’t be called decent humans either.

Facing the grinning men, Subaru wiped his face and stood up in a panic. They were clearly bandits, and considering the state of the world they might even take his life. Mission 1: “Repel the bandits” had begun. The clear condition was eliminating them, and the failure condition was probably his death.

Subaru smacked his cheeks and ignored the chill running up his spine. He had to get serious, hesitation could cost him his life. He at least had confidence in his decisiveness.

“Furthermore, this is another world. Considering the typical pattern I might be super strong here. Something like the gravity being a tenth of what it was or… Come to think of it, my body feels light! Maybe I can win!”

“Maybe he doesn’t get what’s going on. Should we teach him?”

Unlike Subaru, the men remained fairly calm. However, Subaru continued to face them without backing down.

“Woah there, you guys won’t be so calm for long. Let me warn you, guys like me fantasize about this sort of thing all the time. I’ll beat the crap out of you and turn you into XP!”

“I have no clue what you’re saying, but you’re going to die for mocking us.”

With that declaration, Subaru launched his preemptive attack before they could react. He flew into one of them with a full bodied right straight. He landed a direct hit on the leader’s face with such force that his front tooth cut Subaru’s hand.

He’d hit someone for the first time! And it was much more painful than expected!

This was all he’d tried in his simulations, but it was his first time actually doing it, the man he hit fell to the ground and stopped moving. Driven by emotion, Subaru immediately lunged at another man who was still in shock.

“Eat this! A high kick forged by after-bath stretches!”

His foot drew an arc right into the man’s temple and slammed him into the wall. Having knocked a second person out, Subaru started to believe he was invincible due to his unexpectedly competent performance.

“Looks like this world is set to raise my power after all! With all this adrenaline I can definitely win!”

Filled with courage, Subaru turned to the last man as he prepared to take him out. However, the glint of the knife in his hand caused Subaru to prostrate himself on the spot.

“I’m sorry, it was all my fault! Please forgive me, spare-!”

He surrendered on his knees, the greatest and lowest representation of Japanese spirit.

His earlier excitement had completely disappeared. Subaru felt his blood run cold as he tried his very best to beg for mercy, with his head on the ground.

After all, he had no chance against a blade. If he were cut, he’d be finished. Skill didn’t matter when it came to a knife-wielding opponent.

He then realized the two who were supposed to be down were also getting back up. They nursed their bleeding noses and shook their heads dizzily, but otherwise seemed fine.

“Huh?! How come my peerless attacks failed?! Where’s the power I’m supposed to have?!”

“What sort of crap are you spouting?! How dare you do that to us?!”

They stomped his head into the ground, causing his forehead to bleed as it scraped against the road. Subaru desperately curled up as they continued to pile on blow after blow.

They showed no mercy whatsoever, and unlike his old world there was no guarantee they’d spare his life, there was a strong possibility that he’d be tortured to death like this.

Perhaps he should have fought, prepared to die an honorable death. But that was no longer a possibility considering his injuries. Even so, he couldn’t just die like that.

The moment he tried to get up, they crushed his hands underfoot and he could only scream in agony. The man turned red with rage and sent spit flying as he yelled, he then held the knife in an underhand grip.

“We’ll kill you and take everything you have. That’s what you get for messing with us.”

“Your strange clothes and shoes will do then, we’ll turn you into Giant Rat feed.”

―Ah, there’s rats in this world too. Sounds like a bottom-tier monster.

His mind started drifting in an attempt to escape reality as he looked at the knife which could tear into him at any moment. He wasn’t seeing any lights, nor did the world slow down. His life would simply end just like that.

An exasperated voice rang out as someone ran into the alley. The startled men looked up at the intruder, and Subaru attempted to do so as well though he couldn’t move.

A beautiful girl crossed his field of view.

Her frame was small, and she possessed shoulder-length blonde hair which fluttered in the wind. Her eyes suggested a strong will and her fang-like canine protruded mischievously. She looked rather cheeky, but it could be said that she was cute considering her age.

The shabbily dressed girl had just come across the scene of a genuine mugging.

The seemingly deliberate timing caused hope to well up within Subaru. This was it, the development he was waiting for. Following the typical pattern, this kind girl would gallantly save Subaru who was on the verge of death, and then-

“Man, this is crazy. But I’m busy, gotta get outta here! Live strong!”

However, that fleeting hope was crushed.

Their eyes met momentarily and she raised her hand apologetically as she continued to run past them into what seemed to be a dead end.

She then proceeded to leap off a leaning board and rapidly disappeared up the wall.

With the girl gone, the alley naturally went silent. She’d gone by like a typhoon leaving them dumbfounded, but Subaru’s circumstances hadn’t changed one bit.

“Now that the mood’s been lightened, I don’t suppose you might let me go?!”

“On the contrary, we’re even angrier. You’re not going to die a peaceful death, you know?”

The man with the knife looked serious. Subaru realized that he was finished for sure this time, his hands were still trapped under their heels, it was too late to attempt to get up. Ultimately, despair conquered his heart.

―It’s… Over? Just like that, in a place like this? It’s true I haven’t lived very virtuously. Even so, a death like this is just too cruel. If I were to ask what I did, the reply would be that I did nothing at all, a completely idle demise.

Pain… Wasn’t it. There was something else causing him to tear up. It wasn’t something like the fear of the end. He just couldn’t bear having lived such an empty, meaningless life.

A clear voice rang through the alley overpowering the noise of violence, the men’s vulgar jeers, and even Subaru’s own ragged breaths.