「Really,  Emilia-sama is such a pain.」

Looking at the crowd of people walking passed her, the young girl places her hand to her forehead. Despite showing such a tired expression and grumbling, the girl normally had an adorable face. With her sharp facial features and her left eye concealed by short peach pink colored hair. The typical impression would be that of a beautiful girl, but it might be better to say she gave an impression of strength in spite of her cuteness.

Her expression remains relaxed and cool, her lone visible eye not betraying the slightest hint of emotion.

Amidst the noisy crowd, the young girl looked around and sighed seeing no signs of her target. However, her gaze remained determined. her pale skin and petite frame like that of a dancer. An Oni, looking like a cute little animal but so much more. She walked the streets of the Capital City Lugnica, wearing a maid’s uniform, which on its own was eye catching.

Although the uniform was decided upon to suit the interests of her master, the girl had no objection to such an outfit. The design attracted many curious stares from people on the street, but the young girl had grown accustomed to them.

「——She said to just wait a while here, how annoying.」

She was unable to find the “master” of her own master, and gave a dissatisfied shrug..

The pink haired girl’s name was Ram. No family name, it’s just Ram.
She works as the maid of a nobleman of the Dragon Kingdom, Roswaal L. Mathers, an on this day she’s come to the Capital.

As capital of the Kingdom of Lugnica, The city  is more lively than others in the country. For Ram, who has had numerous visits to the Capital, and become familiar with the city as a result of following her master’s orders. Ram wasn’t particularly interested in the city, but——

「It’s always Emilia. He already said from the beginning Ram would lose such a target.」

After making a slight judgment on the character of the target, Ram, who is still pacing back and forth, continues to search.

If you haven’t looked for someone like a stupid person in such a wide place since you have separated with the person for less than 15 minutes, it is more appropriate to judge whether the other person has searched far enough away from the initial position. However, if the she is going to the left at the very beginning, it will be totally luck. If you choose the wrong one, it will be very difficult to find her. If she doesn’t, then there is no way of returning.

​「Even something as simple as sending a letter, she gets lost. Ram must blame Emilia-sama’s curiosity. This was underestimated, Ram isn’t in the wrong.」

​Ram evaluates her current master, who was nowhere to be seen, and the result is the current situation.
In spite of this, no matter how absurd it was, Ram is certainly displeased with the current events.

「If only she had chosen a place to meet, it’s no good. Even with my Clairvoyance, Ram cannot handle so many people……」

「……As a result, you can only personally inquire about it. It’s really troublesome. 」

Hearing an annoying voice that had been calling out from the beginning, the person began scolding the ignorance of Ram as she walked away. When she turned to face the person speaking, Her facial expression dramatically changed.

「Hey,  that look disgusts me from the bottom my heart. Missy, are you sad?」

「Anybody who is not only dressed in suspicious clothing, but even talks in a manner that makes people feel that they have no way to come to know it, will always receive this expression.」

Although Ram was harsh in her first meeting with the person, this time no one would criticize her attitude.

This is because the man who is standing in front of Ram is really beyond common sense.

With a dark, angular helmet, his head is completely covered. If this is the case, he can be recognized as an suspicious man.While his head is concealed in armor, from the neck down instead, he is dressed like a villager with cheap and simple materials. He wears shoes consisting of  straw ropes on his feet. Can he even become more suspicious?

「The law and order of the Royal Capital has also begun to be corrupted. Now it’s time to call the guards over.. Please wait a moment. 」

「If you think of me as a perverted old man, you should be more conscious of  your own safety, right!? What’s the point of waiting in the same place!?」

The tough-looking man, responding to Ram’s harsh approach, stopped in desperation. He stopped and loudly called out after Ram, who was staring straight at him with a pointed gaze.

​「That’s not really a friendly look. Wait a minute please, I’m just looking for someone, so I’d like to find out where that someone may be.」

「That’s too cold for someone wearing a maid outfit which symbolises service, isn’t it!?」

Extending his hand to try to stop Ram from leaving, Ram who sidesteps to avoid the other person suddenly notices ——the man had no left arm.

​「Oh, did you stop out of sympathy? Anyways, that’s right, since I lost my arm, my life has seen and suffered all sorts of awesome fates ! I’m relying on the warmth and sympathy of others to live and survive. Quite unfortunate, aren’t I?  」

「If you don’t have enough hands, just ask a cat. If you’ve enough feet, please find it on your own. That’s all . 」

Toward the helmeted man before her, Ram’s face began to lose it’s angry glare. The man waved his right hand in panic.

「Wait Wait！I just want to find her！May I ask, have you seen a young lady with orange hair who looked almost the same age as you but had very large boobs? 」

「I have never seen her. apart  from what I have done so far in order to send you away, this time it’s a message from my heart.」

「This confession is persuasive!! No way……Well, could you tell me please who you’re looking for?」

「I haven’t answered, because I don’t intend to answer.」

「This is nothing but coldness. We’re both simply searching for our people!」

Ram isn’t entirely sure, but out of dissatisfaction with the man’s heart, she refuses his assistance. She does not doubt  there is dissatisfaction, but the reason for rejection is another problem altogether.

Seeing the silent Ram. the man gave a sad and dejected look as a result.

「Ah……yeah I understand, I’ll stop here. It’s not getting either of us anywhere.」

「I already knew that this was meaningless from the very beginning, but you still wasted the time of mine. What do you really intend to do about myself leaving…. Oh yeah, nothing. I didn’t expect anything out this conversation anyway.」

Giving a glance to the man yelling after her, Ram lets out a「sigh…」 toward him and then leaves. She doesn’t remark further or offer a goodbye. It’s completely disgusting. Then she hears behind her——

Said innocently as she was leaving, and Ram stopped after hearing it. However, the shadow of the man with a helmet has already disappeared.

「——Did Ram ever mention her name?」

Ram mutters this to herself brushing her hand against her pink hair.

Ram’s search still hasn’t progressed well thanks to the helmed man wasting too much of her time.

「Hey! It’ll be best if you keep quiet! Cause us any trouble and this won’t end happily.」

「Isn’t it too inconspicuous? walking down busy streets in that eye catching outfit?」

「We’re not in a patient mood, wouldn’t you say? Maybe we should get a little rough?」

Ram stares at the three sh*t faces with disappointment.

The three thugs, one tall , one brawny, and one short came out of nowhere to begin threatening Ram.

「It would seem the security of the Capital truly is no better than the wilderness.」

「huh? Wilderness? Where are you from?  Doesn’t seem like you’re from The Capital. 」

「I mean you’re no different from wild animals spending your day scrounging for food and behaving in this barbaric way. 」

Listening to their idiotic chatter Ram gave a look of disgust, in that moment the men looked to each other blankly, then laughed.

Unable to read the girl’s attitude, the tall thug pulls two knives and points them toward Ram.

「Aah，I guess her lucks run out.」

「Haha, even if we actually have to  fight, victory is ours.」

Intimidating, berating, the hateful words continue. Ram frowns hearing this, and then for the first time it seemed like she let out a helpless sigh.

「Ram is still trying to show patience, because this is  an important task ordered by Lord Roswaal. ……But now, I am at my limit with this.」

Ram whispers these words annoyed and reaches for a small wand within her dress. She points it to the sky and light starts to shine, magic power bursts in the atmosphere to create a strong wind surrounding her.

The man with the knives was blown away against a wall and buried in debris from the impact. Seeing the brawny man try to make a run for it while his remaining companion froze in place, Ram had already reacted before the fleeing man could even notice.

the large man waved his arms trying to cast aside her wand, but immediately he was thrown into the sky. Slamming into the ground on his back accompanied by a scream before finally the man fainted on the ground..

「Is there something else you want to say to Ram？」

​
The short man gave a nervous smile before being launched into the sky by the merciless Ram. 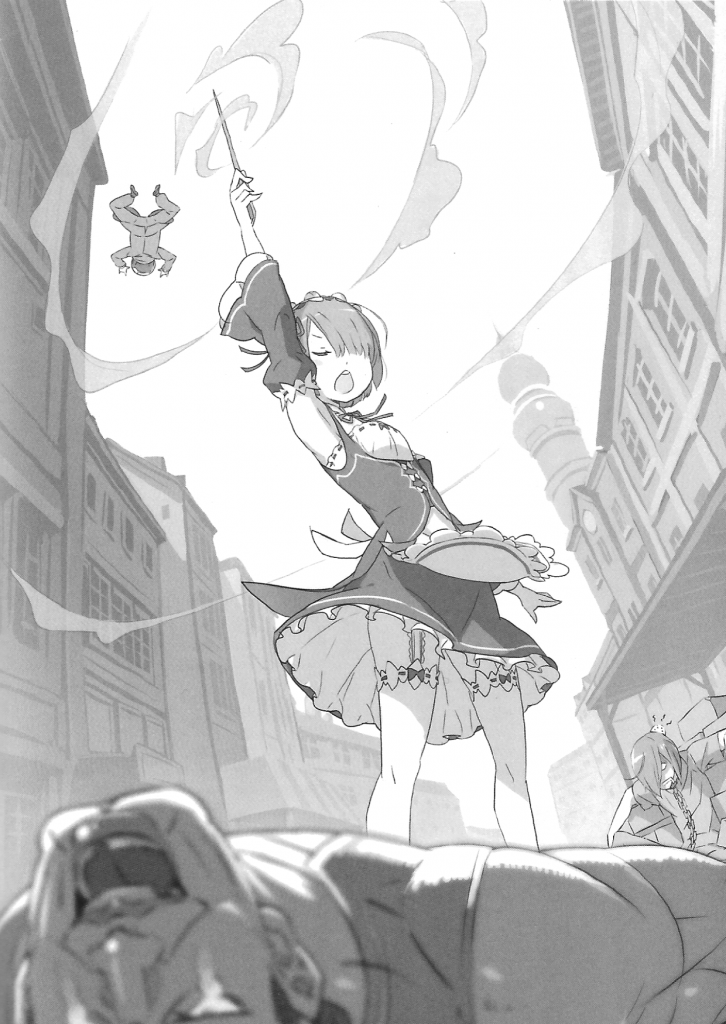 The three thugs were dumped into the alley like trash, and Ram patted her skirt looking up at the dimming sky.

「The sun has completely set…… The target should have already gone back to the mansion.」

Ram’s conditions for finding her target have become more unfavorable. If she is not found quickly, the situation will become very bad. Looking up at the moonlight, Ram suddenly noticed.

Ram looked up at the starry night sky of the Capital and notices Aurora Light waves in the sky.

The waves sweep around, and Ram emerges with a strong sense of intuition and rushes off toward the source of the Aurora Light without hesitation. The person she is searching for is this way, she doesn’t know why, but Ram is sure of it.

「Ram was just about to start thinking that Ram was finally done with being involved with trouble————Ram really is a troublesome person . 」

Ram runs towards the lowest district of the capital————The Slums, and  toward the deepest point of the slums.

She arrived, and in front of her, Ram finds her target holding a teenage boy’s hand. She realizes that the boy will come to the master’s mansion along with her target.

But that’s for another story…